A Food Pyramid for Optimim Health 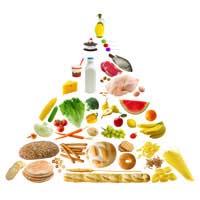 While it’s long been known that a balanced combination of foods from all the basic food groups included in the food pyramid will help produce a fitter body and a healthier system, optimum health requires a different focus, which is more individual and relies on our personal behaviours, food preferences and genetic make up, as well as our budget and our willingness to invest time and money in achieving our utmost.

One key element that alters from person to person is the GI index. This is a standard numerical scale which indicates how fast and how high a given food raises blood glucose (also called blood sugar) levels. Foods with a lower glycemic index result in a slower rise in blood sugar which is important because foods that have a high glycemic index contribute to obesity, diabetes, and cancer. However, while the indices don’t change, our individual responses to the foods can be highly variable – athletes, for example, regularly use both high and low GI foods to give them a peak of energy when undertaking a demanding activity, followed by a lower, slower, energy burn to sustain them. This could be eating a banana and maple syrup wholegrain sandwich, but somebody with diabetes would be ill-advised to attempt the same meal, because their blood sugar would rise too much and could trigger an insulin episode. This means that optimum dietary health has to be a highly personalised process.

In general, achieving optimum health through diet is likely to come from blending two very healthy diet systems: the classic Mediterranean diet and the traditional Asian one – this means eating much more of certain foods than the average European or American currently does, and removing some elements of our daily diets that are probably not helping us reach optimum health.

Foods to Seek Out