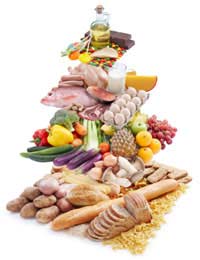 Researchers into food and nutrition discover interesting facts about the food we buy and eat and update the food pyramid with this data on a regular basis. In addition to suggesting how we can eat better, dieticians spend much of their time exploring how we eat and what causes us to change our eating patterns.

Some fascinating research into the Irish economy has just revealed that prosperity can damage our eating habits!

Researchers employed by the Teagasc (Irish Agriculture and Development authority) found that families spent less on meat, eggs and fish during the boom years when the Irish economy was described as the ‘Celtic Tiger’ – but much more on high-fat and sweet foods. The research covered a decade from 1994 to 2004 and revealed that while households had twice as much to spend at the end of the decade, their actual diet had deteriorated. A spokesperson for the Teagasc said that ‘expenditure on foods from the top of the internationally recognised food pyramid which places high fat, sweeter foods at the top of the pyramid, had increased significantly. This is of concern because the public health advice is to use sparingly and limit consumption of these high-fat, high-sugar foods.’

And while there was a decrease in expenditure for meat, eggs and fish, Irish households had not made much change to expenditure on other levels of the pyramid. This worried the Teagasc because it revealed that national campaigns to increase fruit and vegetable consumption had almost no effect but it was to be hoped that this might change now the recession had arrived because a recent report on health trends claimed consumers were looking for healthier foods to offset the costs of ill-health. The spokeswoman added that ‘This is a trend that the food industry can address, by creating more health-orientated foods to support healthy eating, healthy living and ultimately a healthier economy.’

In July 2010 the Journal of Nutrition published a report that claimed virtually the entire US population was eating a diet that bore no resemblance to the food pyramid.

The study was undertaken by research teams from the National Cancer Institute and the USDA’s Center for Nutrition Policy and Promotion. They examined data from nearly 17,000 people across the USA using special modelling techniques that took variables such as weekend, age, gender and ethnicity into account.

The discoveries were disturbing:

These findings have been passed to the federal body that produces food pyramid information in the hope that more targeted work can be done to reach people who are over-consuming less healthy foods and under-consuming healthier ones.