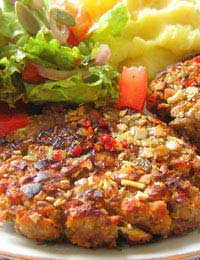 The Physicians’ Committee for Responsible Medicine (PCRM) is an organisation that includes doctors and dieticians who are focused on offering advice on a healthy lifestyle that excludes meat eating or using products tested on animals. The PCRM has created vegan alternative to the USDA Food Pyramid – it’s called the Power Plate and it is divided into four equal areas, which contain fruits, grains, legumes (beans and pulses), and vegetables.

Their nutrition education director points out that "People eat from plates, not pyramids" and claims that the new tool provides easy to use guidance in how to eat well to combat chronic diseases. The PCRM claims that studies reveal that people who eat a diet composed totally or primarily of the four Power Plate food groups have the lowest risk of obesity, heart disease and diabetes.

It’s true that some elements of the food pyramid seem to have become a little unbalanced in the average American diet. In 1950 the average American consumed 144 pounds of meat a year – today the average consumption is 215 pounds. And it’s equally true that nearly two-thirds of Americans would be classed as overweight or obese by a doctor, while it’s projected that one out of every three American children born in 2000 will develop Type 2 diabetes in later life.

What Are the Power Plate’s Advantages?

First, it’s definitely user-friendly – visualising a plate divided into quarters with fruits and grains, pulses and vegetables in each quarter is a very simple process and allows for easy meal planning.

Second, because there are no different proportions in the plate, and the individual is simply asked to eat a colourful variety from all of the four food groups daily, there’s no learning curve to master and no worry about ‘getting it right’ in terms of portion sizes or proportions.

Many people believe that plant-based foods are better choices for those trying to avoid cancer, diabetes, and other chronic diseases than meat-based foods, as well as being more nutritionally rich, and there are some World Health Organisation reports that seem to support this view. In addition, the American Dietetic Association (ADA), claims that "vegetarian diets … are healthful, nutritionally adequate, and may provide health benefits in the prevention and treatment of certain diseases.”

People who are already battling type 2 diabetes, heart disease and some forms of cancer can benefit from a change in diet to improve their health and their ability to combat their condition. Other cancers, such as bowel, stomach, mouth, and breast can actually be avoided by proper diet. The Power Plate seems likely to offer good guidance to people in these situations, and this conclusion is backed up by one of Europe’s biggest ever health research projects.

The EPIC research project is a long-term study of more than 500,000 people in ten European countries, including 90,000 British men and women, 30,000 of them vegetarians – the study, which recruited only healthy individuals and has followed their lifestyles and health for many years, confirmed many key facts about diet, including that colon cancers appear to be related to heavy consumption of processed meats, that gastric cancers are rarer in those with a highly diverse diet, and that tobacco appears to increase and complicate risk factors arising from a diet rich in cholesterol.

Following the Power Plate guidelines at least several days a week, may help prevent or manage many health related illnesses and cancers identified in the EPIC study.